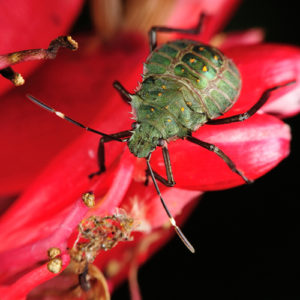 According to George Hamilton, Ph.D., Lynette Yang, B.S., & Rick Cooper the brown marmorated stink bugs (BMSBs) are the latest pest to gain national notoriety. BMSBs have no natural predators in the U.S. and are extremely invasive to the agricultural industry.

Thought to have originated in Allentown, PA in the early 90’s the BMSB is an opportunistic over wintering house invader. When threatened, the BMSB emits a foul and unpleasant odor.

Starting in late August BMSBs begin their search for an over wintering harborage site. Home owners are completely unaware that their home is being occupied by these tenacious pests until the cold weather sets in and the BMSBs start to make their appearance in the living areas of your home. Home owners battling this pest have described the invasion as maddening or overwhelming.

Control is often difficult due to the BMSB’s resistance to most pesticides. A targeted exterior ornamental treatment on host plants prior to BMSBs quest for winter harborage is one tactic that seems to be successful. Timing of preventative treatments is crucial. If you would like your home to be stink bug free give us a call, 302-645-1502.