Biology of Termites in Delaware and Maryland

Often in early spring customers would call requesting a price quote to “spray for flying ants” or “white ants.” After thorough inspection and identification from one of our certified pest control technicians, we find that the flying ant or white ant problem is a termite infestation.

The eastern subterranean termite is considered by many in our industry to be the most destructive wood destroying pest to homes throughout Delaware, Maryland and much the Northeast. Eastern Subterranean Termite Colonies may contain over 3 million individuals so professional termite protection is very important.

They live in colonies with a division of labor among different types of individuals or castes that perform various social functions for the colony. There are three primary castes in a termite colony, workers, soldiers, and reproductives. The most numerous in the termite colony is the worker caste. The workers are creamy- white wingless and consist of both male and females. Worker termite caste is the backbone of the colony. The worker termites duties include constructing and repairing mud tunnels or exploratory tubes, chew and eat wood, feed the queen, soldiers and young. The termite workers are the case that causes the destruction of homes. The termite soldier caste with their large head and mandibles or jaws are the defenders of the colony. In some termite species, the termite soldier is partially or completely blind. Termite soldiers rely on the workers to feed them, making colony defense their only priority. The termite reproductive caste consists of the queen, the king, and supplemental reproductive termites. Initially, eastern subterranean termite colonies grow at slow steady pace but after a few years, the colony builds its reproductive momentum with the termite queen producing 20 to 60 eggs a day.

In addition to the queen laying eggs, the supplemental reproductives add to the egg laying production. Once a colony is established (1 million individual termites) most of the egg laying responsibilities shift to the supplemental reproductive termites. A termite queen will never leave the nest once establishment is made. The worker termites tend to all the needs of the queen in order to keep her laying eggs and guiding the colony.

Termite eggs are about one tenth of an inch in size making them too small for the naked eye and never leave the colony, so it is highly unlikely to ever be seen. The eggs or larva hatch into small termites called nymphs. An interesting feature about termite survival is that the nymphs develop into certain castes (soldiers, workers or reproductives) depending on the need of the colony at that time. During the molting process, the nymphs shed their exoskeletons and become active termites ready to contribute to the colony or termite infestation.

At certain times of the year and when conditions are right, termite swarmers (called alates) will take their nuptial flight. Often mistaken for flying ants, termite swarmers or winged termites are part of the reproductive caste of the colony. Male and female reproductive swarmers usually emerge in spring, although termite swarmers may emerge almost any time during the year. In Delaware and Maryland swarms occur most often when the temperatures are hot and humidity is high.

After a short flight, which may only last a few minutes, the male termite swarmer and female termite swarmer court and strive to establish a new colony. When the nuptial flight is over the termite male and female swarmer lose their wings naturally. The female termite releases a sexual attractant pheromone which the male gladly chases in a tandem behavior. After the short nuptial flight, the pair seeks a suitable moist wood to ground contact location to start a new colony.

Activ Pest Solutions Values Your Home as Much as You Do.

It is our policy to provide each customer with a Free On-site Thorough Inspection by a Full Time Certified Pest Control Professional Technician. We will complete a thorough inspection of all the accessible visible areas of the home or structure, determine whether or not termites are actually present, note any conducive conditions that may contribute to an termite infestation, gather structural awareness or construction variable data and provide you with a solution to treat and eliminate your home of termites . 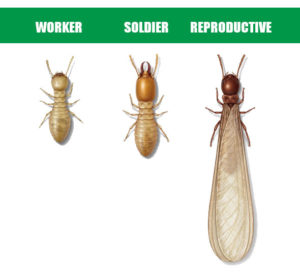